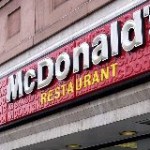 Jobs in a new McDonald’s branch in Ennis have attracted applications from unemployed bankers, architects and accountants.

There were 500 applications for jobs in the new branch in 10 days. The jobs were advertised solely on a banner at the site which was taken down after 10 days because franchisee Kieran McDermott had received so many CVs.

He said the situation was the direct opposite in 2002, when he opened a branch in Shannon.

Employees were difficult to find then, as Ireland was at the height of the boom with very low levels of unemployment.