Morgan McKinley is the first Irish recruitment company that have enabled job seekers to apply to their jobs via the Apply with LinkedIn plugin from LinkedIn. After talking to recruiters in Morgan McKinley they say that it does have a drawback because they do not get the applicant’s CV but just a link to the LinkedIn profile.

But Morgan McKinley might me one something much larger here actually. The Apply with LinkedIn button solves one problem that always puzzled me. And that was the applications from the mobile devices? Ireland mobile users are predominantly iPhone 4 users. And guess what – in the iPhone you cannot apply to a job on a web site. Uploading of a CV is not supported. So with all this tremendous growth of the mobile smartphone (or not so smart!?) web traffic the only conversion one could achieve is to make job seekers email themselves with a link to the job advertised, and deal with it later on, on the PC. And that we know is pure rubbish of a process. Having a button that sends a recruiter your LinkedIn profile instantly – and all that with a single click (well two actually) sounds much better to me.

Morgan McKinley being ranked as a second highest ranking recruitment agency in Ireland by Alexa has a significant traffic on their site. We are not talking hundreds a day any more for a long time now. There is most likely still a single digit percentage of the mobile visitors, but that will grow to double digit figure in the next year as well. Without the Apply with LinkedIn button – they would not get a single interaction from all those mobile users. 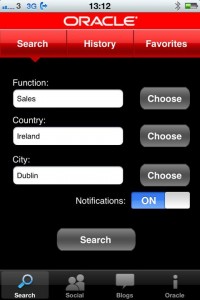 Just looking at the Oracle iPhone jobs application. Note that the Search screen has no free text search. As opposed it has the three ‘pull downs’ for Function, Country and City. It might be slightly unusual for job hunters used to do free text searches on any jobs web site. Should the mobile platform be limiting the job hunters so much? I am not too sure about it.

The ‘Choose’ buttons could be removed as well actually. If you click on an entry in the pull-down – I am guessing you have ‘chosen’ it? Or does this let you do some multiple choice?

It is early days jet and it will be the job seekers who will need to drive the further development. So some form of providing feedback on the apps functionality would also be nice somewhere, especially in the early days.

Congratulations to Oracle who is really leading the way in the recruitment innovation. The Blogging efforts, the communities and this mobile app really set your recruitment team apart any competition in Ireland.