Jobs Board got shortlisted for the Irish executives Inspire Ireland 2011 Award. 7 of us got shortlisted and one after another we presented our business plans to the Irish Executives judges today. It was an online event. Video conferencing was used that connected us all. I never presented a business plan to a camera as opposed to the live audience in front of me so it was a bit strange doing it the first time. The video quality regardless of how good it is, still makes it harder to ‘read’ your audience. You do not see those fine details of their facial expressions. Also, you only see the part of the body that the camera is capturing. I only realised all that at the end of the conference, since although I ‘saw’ the recipient, I could not really confidently say how good did the whole presentation actually work. Was it all convincing? I am not sure actually. 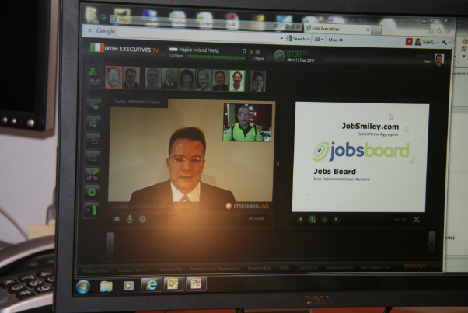 The format is also distracting a bit because the PowerPoint presentation has to be managed by a precise click on the screen, as opposed to the clicker. This makes you look for a second or two at the screen as opposed at the camera, and being aware it does not look right on the other end it made me uncomfortable a bit. A hint if you are developing a video conferencing software. Make sure people can use the keyboard or the clicker for their PowerPoint presentations as opposed to some super small arrow buttons on the screen.

Being shortlisted for the Irish Recruiters Inspire Ireland Award is probably the best thing that could happen to JobsBoard.ie so early in its lifetime. The only better thing would be to actually win the Award! The publicity is what it is all about, and a recognition by the very high-level judging panel.

I wish all the best to all other participants, especially those that got shortlisted and interviewed today with me. Regardless of the end results being shortlisted is an achievement we should all be proud of. Let the best man win tomorrow!

Me in the press again. This time in the InBusiness magazine by Chambers Ireland. Here are a few snippets:

“PEOPLE WILL BE COMFORTABLE BUYING FROM A COMPANY THAT HAS THOUSANDS OF PEOPLE RECOMMENDING THEM.” – Ivan Stojanovic

Conventional advertising and marketing strategies are typically one-way communications with the product or service provider addressing customers. However, social media and social networking sites offer businesses the opportunity to engage with their customers or clients. Blogs, forums and profile pages can reach a large potential market, are free, and will allow a company to conduct market research and respond to the needs of their customers. It’s important to remember that your aim is to encourage customers to visit your website where they can get more information andenquire about making a purchase. “Facebook itself will not sell your products or services directly,” says Ivan Stojanovic. “However, if used correctly, it will bring visitors who should then be encouraged to leave comments about your offering. Your company blog will also drive relevant interested visitors to your company page where they can purchase your products or services.”

Building visibility and brand awareness on social networking sites is relatively easy. Building credibility, on the other hand, takes time and effort. However, once that is achieved, third-party recommendations can be a major boost for your business. Stojanovic agrees: “People will be comfortable buying from a company that has thousands of people recommending them, and not a single unhappy customer. eBay pioneered the introduction of social media on their existing merchant site. When you buy something, you can rate a supplier. This brought trust into online shopping and made eBay the largest online shopping site.”

Ivan Stojanovic works in the recruitment industry and operates EmployIreland.ie. JobsBlog.ie is where he waxes lyrical on the topic.
He keeps us up to date on the latest seminars, talks, new sites and companies, and tackles issues like ’10 don’ts for job hunters on social
networks’.
His top tip? Make sure nothing embarrassing shows up when you Google your name.

Thanks Silicon Republic for the nice touch!!!

OVER a third of recruiters have lost their own jobs, due to the record hike in unemployment.

The industry dedicated to matching vacancies with workers has itself been decimated over the last 12 months with a total of 4,500 jobs lost in what was once a 12,000-strong sector.

Many employment agencies have drastically reduced their staffing levels as the numbers signing on soared by 97pc.

The group representing employment agencies, the National Recruitment Federation (NRF), saw just a handful of clients go to the wall but has recorded a massive drop in the number of employees.

NRF president Frank Collins, said he knew of one agency where staffing levels plummeted from 12 to just one person, and another where they fell from 28 to eight.

He said “green shoots’ were visible in some sectors of the economy, although employers were waiting to see if this would lead to a recovery.

Managing director of recruitment website employireland.ie, Ivan Stojanovic, said his business survived purely because it was not heavily dependent on placement adverts.

“Recruiters have been the hardest hit of any sector,” he said. “As time goes by, it’s getting worse and worse. I believe the figure of those who have lost their jobs in recruitment could be around two out of three.

“If there are no signs of the unemployment rate dropping, we are facing the current Spanish rate of 18pc.”

However, Mr Collins was more optimistic about the prospects for recruiters following a pickup in ads in the past few months.

“January and February were the worst months, but since then it has picked up,” he said. “Recruiters had to cut their cloth to suit their revenue.

“Without placements, there is no revenue.”