I just love analyzing the statistical data. Where is a LinkedIN poll: 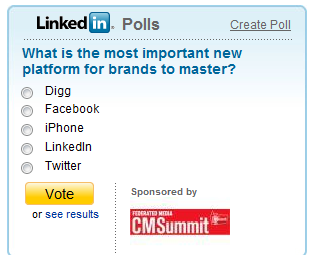 Great! Now let’s put this into the perspective. This is a poll on the LinkedIN page. So the 100% of teh people who answered are a registered LinkedIN users.

Imagine now that you put a poll with the same question on Twitter? One think is almost sure. iPhone would be twice the size of LinkedIN. Twitter would be more than 60% is my best guess. Wouldn’t be surprised if it would jump to 80%.

The conclusion is that even the LinkedIN users know that LinkedIN is not the most important platform for companies to master.

The following shows chart that the higher you are in your company organization structure, the more you are aware that Twitter is the next BIG thing. More than half of ‘Business Owners’ say Twitter!